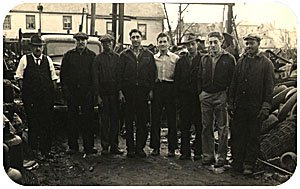 Finkles is a 100 year-old supply house in Lambertville, NJ. We have been supplying residents, contractors, municipalities, institutions and maintenance persons since 1917. We sell residential and commercial lighting and electrical supplies. We also sell kitchen and bath supplies; faucets, sinks, tubs, toilets, vanities, cabinets, etc. We have pipes, valves, fittings and other plumbing supplies. We sell decorative cabinet and door hardware, as well as gate, window and industrial hardware. We have an extensive selection of fasteners (nuts & bolts). Our heating department includes anything from electric floor heat and gas heaters to oil tanks, boilers and fireplaces. We sell steel beams and shapes. We also serve as the local hardware store to our community.

Our history can be traced back to Joe Finkle’s purchase of land at 7 Coryell Street in Lambertville, NJ in 1917. This is still our main store with three additional buildings on Coryell Street. 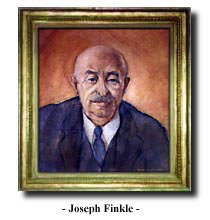 Prior to arriving in Lambertville, Joe Finkle lived in the Bessarabia region of Russia (near Moldova and Odessa in the Ukraine) where his family had a general store. Joe was one of five children who lived in a house with a dirt floor. His mother died when he was 10 years of age. Joe did not get along with his new stepmother and he went to live with foster parents. After being drafted into the Russian army, Joe decided to seek his fortune elsewhere.

In 1895 he set sail for the USA via Liverpool and arrived in Philadelphia at age 25. He joined his brother in Trenton, NJ. He already spoke Yiddish, Hebrew, Russian and Polish. Now he had to learn English. He made a living by selling merchandise that he carried in a 60-pound pack on his back. He would walk from Trenton to Lambertville stopping to buy and sell at the farms along the way. He established a reputation for fairness and honesty.

In 1900 he moved with his wife and two infants to Lambertville and set up a junk business. They moved into 108 Coryell Street (since demolished to create Route 179) at night, so that the neighbors would not see how poor their furnishings were. A scale for weighing scrap metal was set up on the back porch. They had a barn for their horse, wagon and junk storage. They did not have indoor plumbing. They had a chamber pot, an outhouse and a telephone. They had electricity, an icebox and a wood stove.

With an old, blind horse and a covered wagon, Joe went from house to house in Lambertville, New Hope and Stockton collecting junk. He bought rags, paper, iron and even bones. He sold to a larger wholesale dealer in Trenton. During World War I he sent out circulars to farmers throughout Hunterdon County announcing that he would be at the Frenchtown, Pittstown, Clinton or Milford Railroad Station on such and such a date to buy discarded equipment and other junk, listing what he would pay for various scrap materials. His advertising line was, “Beware of imitators using my name.. To promote his business he touted, “Nothing too big; nothing too small; just call Joe Finkle, dot’s all!” 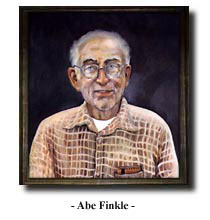 As Joe’s junk business grew, he purchased the lot at 7 Coryell Street. It had previously been Massey’s Coal Yard and consisted of a small shack heated by a coal stove and lit by a Coleman Lantern. There was an old typewriter and the shack served as the business and sales office. Scrap was collected in the yard behind the shack. Early merchandise included scrap of all kinds, World War I army surplus, rubber footwear made at the Lambertville Rubber Company, rejects and returned merchandise, hardware and second-hand machinery.

Abe ran the business until his death in 1994. His nephew Richard Finkle worked in the business for 25 years. Currently, Abe’s daughter Rachel is “the Finkle in Finkles” since 1992. Along the way, we have enjoyed the talents of many long time employees who have spent their entire working lives contributing to the quality of the business.